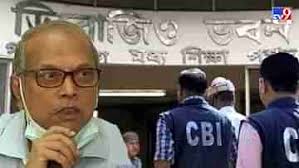 SSC Recruitment Scam Arrested in SSC Recruitment Scam Now the CBI has arrested the former president of Madhya Shiksha Parshad Kalyanmoy Gangopadhyay. He was summoned by the CBI several times in this case. It is to be noted that he was removed from the post in June this year. On this day, he was interrogated for six hours.

Kalyanmoy Gangopadhyay has handled the responsibility of the Board of Secondary Education for 10 years. There was a mountain of evidence of corruption against Kalyanmoy. The opposition alleges that corruption was organized keeping him in front, the state government changed the law.

Kalyanmoy Gangopadhyay arrested in which case

According to CBI sources, Kalyanmoy Gangopadhyay was arrested in the case of recruitment of Group C and Group D employees in the School Service Commission. Kalyanmoy’s good relationship with jailed former education minister Partha Chatterjee was well known in the education circles.