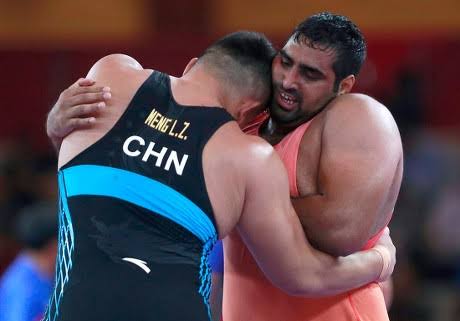 Indian wrestler Naveen won gold in the 74kg freestyle to continue his country’s winning streak at the Commonwealth Games.

Naveen won a gold medal in the men’s 74kg freestyle final on Saturday, bringing India’s total of medals in wrestling at the Commonwealth Games 2022 to four. With his fourth victory of the day over Pakistan’s Muhammad Sharif Tahir, Naveen earned his first CWG medal.

With his victory in the men’s 74kg freestyle final on Saturday, Naveen enhanced India’s medal total in wrestling at the Commonwealth Games 2022. In order to earn his fourth victory of the day and first CWG medal, Naveen overcame Pakistan’s Muhammad Sharif Tahir.

SEE ALSO : Phogot made history by becoming the first female Indian athlete to win gold in the Commonwealth and Asia Cups

Naveen’s hardest opponent of the day was Tahir, but the fact that the Indian grappler defeated him by a commanding 9-1 scoreline shows just how dominant the 19-year-old was.

Tahir went after Naveen’s legs right away, but the Indian flipped it around and took him to the ground to score two points. Naveen led after the first half with one takedown, and Pakistan’s defence got better each time he went after Tahir.

But when the second round started, Naveen tackled Tahir and used three rolls to extend his lead to 9-0. It appeared that Naveen would be able to win by technical advantage once more, but he would be happy with a victory based on points.

The Singaporean Hong Yeow Lou was Naveen’s next opponent, and this time he warmed up the match even faster, winning 10-0 in a minute and two seconds. Naveen faced off against Charlie Bowling, a local favourite, in the semifinal, and he lasted a little longer, but it only took Naveen three minutes and 12 seconds to win 12-1, earning him a spot in the gold medal match.

Following a strong performance at the 2022 Senior Asian Championship, where he won a bronze medal, Naveen entered the CWG 2022.