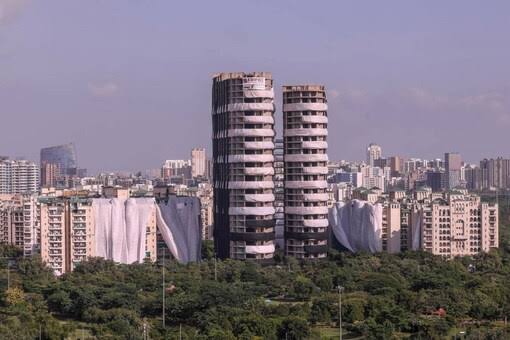 Supertech twin towers Demolition Live: 55 thousand tons of debris will be created in the demolition . Arrangements are in place to prevent air pollution.

The destruction of twin towers in Noida at 2.30 pm. Supreme Court orders demolition of 100-metre-tall structure

Supertech’s illegal twin towers in Uttar Pradesh’s Noida, taller than the famous Qutub Minar, will collapse like their houses in just 9 seconds at 2.30 pm on Sunday.

A breathtaking sight of engineering for the almost 100 meter tall structure to be demolished due to corruption is going to be seen by all Indians including Noida. Preparatory work is done to set the stage for safe demolition. Only last-minute inspections remain as the towers will be destroyed in nine seconds by the waterfall explosion technique.

More than 3,700 kg of explosives will be used to demolish the structures following a Supreme Court order by the Emerald Court Society in their illegal construction on the premises.

Why are twin towers in Noida being demolished?

What is the problem with Noida Twin Towers?

Illegal enforcement of building laws The twin towers are being demolished as it has violated numerous building laws. Destruction will be done through a controlled explosion technique. Accidents can happen at any time

The closest buildings next to the Twin Towers, Emerald Court Society’s Aster 2 and Aster 3, which are 9 meters apart, will be demolished in a safe manner to avoid structural damage.

The adjoining Noida-Greater Noida Expressway will remain closed from 2.15 pm to 2.45 pm, with the city maintaining a no-fly zone due to the use of drones. According to Noida authorities, airspace within a nautical mile radius above the blast site will also be unavailable for flight operations during the destruction.

All the work related to placement of explosives and their connection has already been completed. The only work left was to join the twin towers together and lay a 100-metre long cable from the structure to the exploder, detonated on Sunday at the push of a button.

Who will break?
Mumbai-based Edifice Engineering has been entrusted with the task of safely pulling the Supertech twin towers structures. Edifice is bringing in South African specialists Jet Demolitions to collaborate on the project. The entire exercise is being supervised by the local Noida authorities