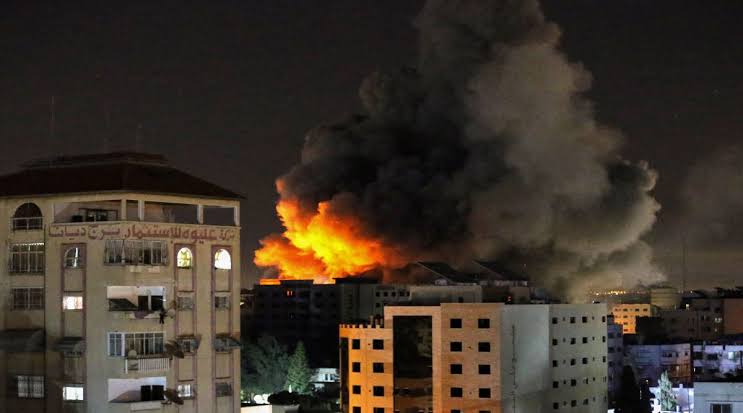 The fighting, which took place overnight on Friday with Israel’s dramatic targeted killing of a senior Palestinian Islamic Jihad commander, put the sides in an all-out war situation. The region’s Hamas rulers are staying on the sidelines of the conflict, keeping some of its intensity under control for now. Israel and Hamas have fought four wars and several smaller wars over the past 15 years in territory home to 2 million Palestinian residents.

The latest in Israel-Gaza violence comes this week with the arrest of a senior Islamic Jihad leader in the West Bank, following a month-long Israeli military operation in the region. Israel then closed roads around the Gaza Strip amid security concerns and killed the militant leader in a targeted strike on Friday.

An explosion was heard in Gaza City, with smoke billowing from the seventh floor of a high-rise building. Video released by the Israeli military showed three guard towers being blown up in the attack, including suspected militants.

In a nationally televised speech on Friday, Israeli Prime Minister Yair Lapid said his country launched the attack based on a “concrete threat”.

“This government will have a zero-tolerance policy for any attempted attacks from Gaza towards Israeli territory,” Lapid said. ‘Israel will not stand idly by as those harm its civilians.’

‘Israel is not interested in a larger conflict in Gaza but will not back down from one.’ she added.

Hamas also faces the dilemma of deciding whether to join a new war a year after the massive destruction of the last war. There has been almost no reconstruction since then, and the isolated coastal region remains mired in poverty, with unemployment hovering around 50%.

A 5-year-old girl and a 23-year-old woman were among the dead in Gaza, without distinguishing between civilian and militant casualties, the Palestinian Health Ministry said. The Israeli army said an initial estimate was that about 15 fighters had been killed. Dozens were injured.

According to a military spokeswoman for Israel, two militant teams carrying anti-tank rockets posed a “imminent threat” that prompted the attack. Al-Jabari was intentionally targeted, according to the spokesman, who spoke with reporters under the condition of anonymity. He also carried out “multiple attacks” in Israel.
Hundreds of mourners carried Palestinian and Islamic Jihad flags while urging vengeance during the funeral procession for him and the other victims.

Israeli media depicts rockets and interceptors from Israel’s Iron Dome missile-defense system dotting the skies over southern and central Israel. There were no immediate reports of Israeli injuries, and it was unclear how many rockets were fired.

Israel attacked Islamic Jihad positions, rocket launchers, and rocket manufacturing facilities throughout the course of one night. According to the military, it also detained 19 Islamic Jihad fighters in the West Bank.

“Rocket launches must stop immediately,” declared Tor Wensland, the UN’s special representative in the area. “I call on all parties to avoid further escalation.”

Several hundred Palestinians gathered in front of the morgue at the major Shifa hospital in Gaza City following the initial Israeli bombardment. After seeing loved ones, some people started crying.

One yelled, referring to Palestinian informants who helped Israel, “God take revenge against the spies.”

After the military declared a “special situation” on the home front, with schools closed and community activities restricted within 80 kilometres of the border, Defense Minister Benny Gantz issued an order to send up 25,000 reserve troops if necessary.

Following the Monday military operation in the occupied West Bank that resulted in the arrest of Islamic Jihad leader Bassam al-Saadi, Israel earlier this week restricted highways near Gaza and sent soldiers to the border. In a shootout involving Israeli troops and Palestinian militants, one of the group’s adolescent members was murdered.

Ziad al-Nakhallah, the chairman of the Islamic Jihad, told Iran’s Al-Mayadeen TV network that “Palestinian resistance fighters must stand united to repel this onslaught.” He declared that there would be “no red lines” and attributed the violence to Israel.

“Israel’s adversaries, who launched the escalation against Gaza and committed a new crime, must pay the price and take full responsibility for it,” claimed Fawzi Barhoum, a spokesman for Hamas.

Although smaller than Hamas, Islamic Jihad is supported by Iran and shares much of its philosophy. Both organisations reject Israel’s existence and have engaged in a number of violent attacks against Israel over the years, including the firing of rockets. Israel holds Hamas responsible for all attacks coming from Gaza, while it is unclear how much authority Hamas actually has over Islamic Jihad.

Since Hamas’s takeover, Israel and Egypt have maintained a strong siege of the area. According to Israel, the shutdown is required to stop Hamas from advancing its military capabilities. The policy, according to critics, amounts to collective punishment.