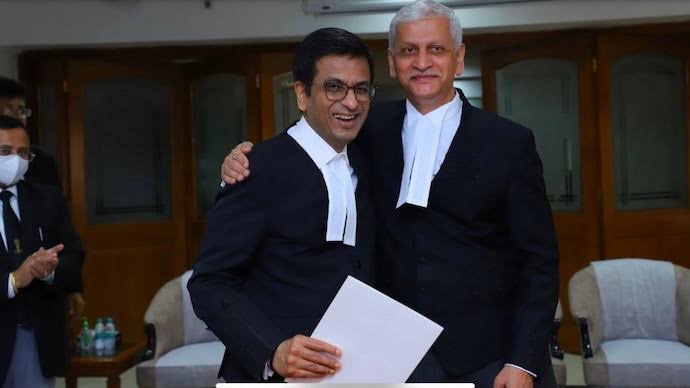 Chandrachud Justice assumed charge as the Chief Justice of the Supreme Court for two years — he will hold office till November 10, 2024.

Justice Dhananjaya Y Chandrachud today took oath as the 50th Chief Justice of the Supreme Court of India. President Draupadi Murmu administered the oath to him through a colorful ceremony at Rashtrapati Bhavan.

In his first statement to the media at the swearing-in ceremony, Justice Chandrachud noted, “serving the common citizen is my priority,” and promised to reform the registry and judicial processes. “My work, not my words, I will speak,” said the judge.

Justice Chandrachud will remain the Chief Justice of the Supreme Court for his tenure of two years — till November 10, 2024. He replaces Justice Uday Umese Lalit, who held office for a short tenure of 74 days.

Justice Chandrachud has tried many noteworthy cases. On May 13, 2016, his name was proposed as a judge of the Supreme Court Ayodhya land dispute, right to privacy etc. He was in several constitutional benches and landmark judgments.

Sabarimala was also part of the bench on the same-sex relationship issue and on the bench that ruled on the validity of the Aadhaar scheme under Section 377 of the IPC.

A bench headed by Justice Chandrachud passed several orders addressing the plight of the people and the recovery from the Covid crisis. More recently, the bench headed by him expanded the scope of the Medical Termination of Pregnancy (MTP) Act to include “unmarried women”.

He practiced in the Supreme Court and the Bombay High Court and also served as Visiting Professor of Comparative Constitutional Law at the University of Mumbai.