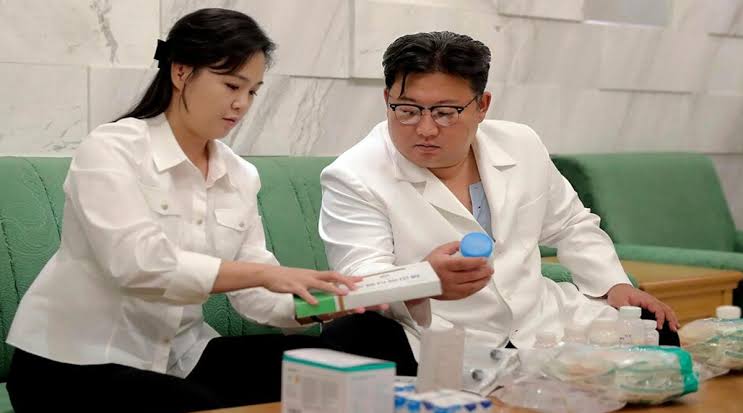 Seoul: North Korea announced the emergence of a new contagious disease on Thursday, in addition to the continuing COVID-19 outbreak, and said that its leader, Kim Jong Un, had provided his personal medicines to those infected.

Although the severity of the new disease is unknown, some outside observers believe North Korea is attempting to burnish Kim’s image as a leader who cares about the well-being of his people, as he will require greater public support to overcome pandemic-related challenges.

According to the official Korean Central News Agency (KCNA), Kim gave his family’s reserve medicines for people diagnosed with “an acute enteric outbreak” in the southeastern Haeju city on Wednesday. Separately, the North’s major Rodong Sinmun newspaper published a front-page photo of Kim and his wife Ri Sol Ju discussing saline solutions and other topics. saline and other medicines that they were donating.

Dr. Tedros Ghebreyesus, the Director-General of the World Health Organization, will visit Gujarat for three days.

The KCNA did not go into detail on the outbreak or how many people have been afflicted.

According to some observers, North Korea’s “enteric pandemic” refers to an infectious disease such as typhoid, dysentery, or cholera, which are intestinal ailments spread by germs through contaminated food and water or contact with sick people’s feces.

Such infections are common in North Korea, which lacks adequate water purification facilities and has had a mostly shattered public healthcare infrastructure since the mid-1990s.

“In North Korea, outbreaks of measles or typhoid are not unusual. “I believe there is an infectious illness outbreak there, but North Korea is using it as an opportunity to show that Kim is concerned about his people,” said Ahn Kyung-su, the director of DPRKHEALTH.ORG, a website dedicated to North Korean health issues. “As a result, it’s more of a political message than a medical message.” According to official media sources, Kim already supplied his family’s meds to COVID-19 sufferers last month.

According to the KCNA, an unnamed fever has sickened more than 4.5 million individuals out of the country’s 26 million people, although only 73 have perished. Due to an apparent paucity of test kits in the country, only a portion of those have been confirmed as coronavirus infections. Many foreign analysts doubt the North’s death toll, claiming that it is likely underreported in order to protect Kim from domestic political repercussions.

Kim stated last week at a ruling party meeting that the pandemic scenario has passed the “severe crisis” stage. However, the country continues to impose tighter restrictions, which some analysts believe will put even more strain on the country’s already ailing economy, which has been battered by long-running pandemic-related border closures and UN sanctions.