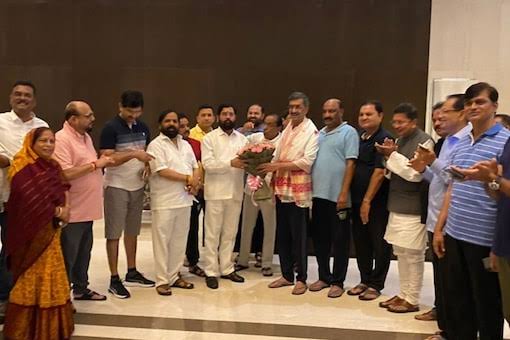 Sixteen Shiv Sena MLAs who have allied with rebel leader Eknath – not to associate the party with the Congress and the Nationalist Congress Party and to re-align with the BJP – were given a disqualification notice by the Deputy Speaker in the Maharashtra Assembly on Saturday. They have been asked to respond by 5:30 pm on Monday. There are names in the list of 16 people. Eknath also has names.

If they are disqualified, Eknath Shinde will lose his MLA post and it is significant that his revolt will not end.

Eknath on Friday challenged the deputy speaker – Narhari Jirwal – to act and responded to the army’s move by seeking a notice of disqualification.
Two independent MLAs – Mahesh Baldi and Binod Agarwal, who are seen as close to the Bharatiya Janata Party – sent a notice stating that a no-confidence motion against him was still pending and, as such, he had no authority.

Their notice was rejected earlier today.
Shiv Sena issued original notices against 12 rebel MLAs, including Eknath, on Thursday evening and four more names were attached on Friday.
The issue escalated after Chief Minister Uddhav Thackeray and Sanjay Raut tweeted a few warnings on Saturday morning due to calm between the rebels.
He first quotes Rudyard Kipling as saying ‘beware of being too anxious for money, position or glory’. The next day he warned the rebellious legislators that if they did not return; “… Soldiers have not yet taken to the streets … If they do, the streets will be set on fire,” he said, adding that a rebel’s office had been vandalized some time ago.

On Saturday, Eknath extended a letter to Uddhav Thackeray and his home minister, Dilip Walse-Patil, alleging that security at their home in Mumbai had been “corruptly withdrawn”.

Walse-Patil responded quickly, “Neither the Chief Minister nor the Home Department has ordered the withdrawal of the security of any MLA.
There was also a clash between the two camps when Eknath’s side said they had decided to call themselves ‘Shiv Sena (Balasaheb); During the revolt, Eknath Shinde insisted that he was a “true follower” of the late party founder.

“Our party will be called Shiv Sena (Balasaheb). We will not be centered with any party,” said Deepak Kesarkar, one of the rebels.
Uddhav Thackeray’s reply came back: “I will not interfere in their (rebel) affairs – but no one can use the name of Balasaheb Thackeray.