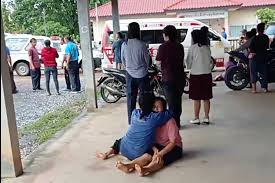 A former Thailand police officer opened fire at a day care center, killing at least 35 people, most of them children, before turning on his family and then himself.

Police Colonel Jakkapat Bijitraitha said that 23 children were among the dead. According to witnesses, the gunman entered a locked room where the children were sleeping.

After the attack, the gunman went home and killed his wife and child, Zakkapat said.

Former police officer Paniya Khamrab, aged 34, and Zakkapat, said the attackers. He was dismissed from the force last year on drug charges.

Nanthicha Punchum, acting head of the nursery, described the incident when the attacker entered the building

“The assailant parked his car outside, some workers were having lunch outside the nursery. He suddenly attacked with a gun and shot dead four of them,” he narrated. “The shooter broke down the door with his foot and then came in and started cutting the children’s heads off with a knife.”

The daycare center is located 500 kilometers (310 mi) northeast of the capital, Bangkok. Most of the children were stabbed to death at the institution in Sawan, Uthai city, police said.

Footage shows distraught parents crying outside the nursery after the attack.

‘I thought it was fireworks’

District official Jidapa Bunsom said the gunman killed 30 children when he entered the center at lunchtime.

First, a teacher and four workers who were eight months pregnant were shot dead.

“At first people thought it was fireworks… it was really shocking. “

Photographs show two bodies lying on the floor of the center covered in white sheets.

Eyewitness Pabina Purichan, 31, was on her way to the shop on her motorcycle when she saw the assailant running away. “He was bumping into others on the road,” he said.

“The attacker rammed a motorbike and injured two people. I kept running away from him. There was blood everywhere.”

Police spokesman Paysan Luisombun told broadcaster Thai PBS that the gunman was in court on Thursday in a drug case. He goes to the daycare to look for his own child, but does not find his child there.

“He was already stressed and when he couldn’t see his child he got more stressed and started shooting,” Paisan said, adding that he then went home and killed his wife and child there before killing himself.

Thai Prime Minister Prayuth Chan-o-cha ordered the national police chief to “promptly investigate” and said he would visit the scene of the attack on Friday.