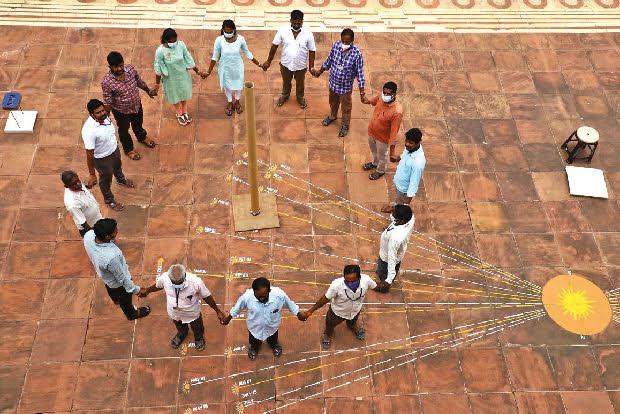 The first zero shadow day for Kolkata this year will be on June 5, 2022, with the zero shadow moment occurring around 11:34 a.m.

On June 5, the city will experience its zero shadow moment, when there will be no shadow cast by sunlight at a specific time of day.

This happens twice a year when the sun is directly overhead, according to astrophysicist Debiprosad Duari.

Unless it is absolutely above the object, any type of visible light falling on it forms a shadow. People and objects living between the Tropics of Cancer and Capricorn (+23.5 and -23.5 degrees latitude) lose their shadows twice a year, though only for a brief duration. He referred to these two days as “zero shadow days.”

The first zero shadow day for Kolkata this year will be on June 5, 2022, with the zero shadow moment occurring around 11:34 a.m. However, the day of zero shadow in other regions will vary based on their location between the two Tropics, according to Duari.

The sun will be exactly above in Kolkata on July 7, at roughly 11:41 a.m., on its return journey (known as Dakshinayan), and the day will be the second zero shadow day of the year, he noted.

Meta instruct employees not to discuss abortion at work.

Every year on the zero shadow days, students and astrophiles living between the two Tropics erect vertical poles, various objects, and occasionally even stand outside to witness the cosmic event for themselves.

The zero shadow moment occurred when all objects under the Sun lost their shadows for a few moments in several cities where the zero shadow day had already occurred this year.

This occurrence, according to Duari, also serves as a reminder to people of the motions and positions of celestial bodies in relation to Earth, which have direct linkages to events on the planet such as seasonal changes, tides, and eclipses, as well as zero shadow times.

At midday, the sun is nearly never directly overhead, but it frequently transits a little lower in altitude to the south, he added.