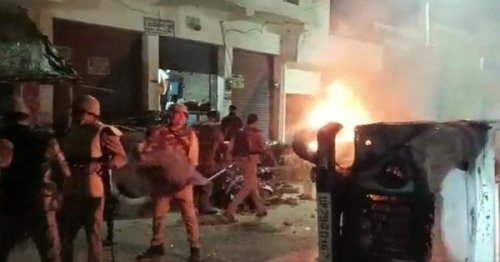 Around 200 Popular Front of India (PFI) members were arrested in raids across seven states early on Tuesday. According to sources, extensive searches by the state police in Uttar Pradesh, Madhya Pradesh, Gujarat, Assam, Karnataka, Delhi and Maharashtra through central agencies NIA, ED and police indicated that the PFI had unearthed “plans for violent protests”. .

Intelligence sources said that by 6 am the operation was underway at 200 locations in seven states. More than 170 cadres were arrested during the operation. Fresh probes surfaced soon after an intelligence memo, in which the PFI targeted government agencies and BJP and RSS leaders.

PFI is planning a serious and sinister way to disturb public peace According to the note, they are angry after their senior leaders were detained in New Delhi’s Tihar Jail.

The note also mentions that PFI cadres chose to retaliate violently against the government. They have resorted to appointing ‘Baytis’, in Arabic meaning ‘Brokers of Death’ or ‘Fidayeen’, who take a pledge of allegiance to their Ameer (Chief).

Various National Investigation Agency (NIA), Enforcement Directorate (ED), police and other government officials who are said to be hostile to their interests.
They also have Hindu organizations and leaders involved with the aim of communalizing the situation and creating hatred among people.

The modus operandi may be a lone wolf attack. According to their code of conduct, no one other than Amir will know the details of the plan and the identity of the target.

According to top government sources, PFI has targeted some top BJP leaders and RSS workers. The security of the leaders has been strengthened.

The PFI also targeted some RSS leaders and conducted raids on ‘branches’ after which security was beefed up.

The banned outfit has been accused of several political killings of BJP and RSS workers in the past, particularly in Kerala.

PFI, founded in Kerala in 2006, claims to be a neo-social movement aimed at empowering marginalized sections of India and originated after the ban on the Students Islamic Movement of India (SIMI).

Recently, Bihar Police unearthed a terrorist module in Phulwari Sharif, a suburb of Patna.
The PFI hit the headlines after announcing the organisation’s aim to “make India an Islamic country by 2047”.