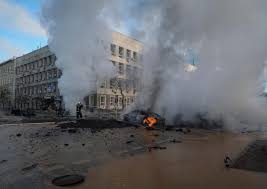 Another explosion in Kiev today After Russian President Putin blamed Ukraine for a deadly explosion on a bridge linking Crimea with Russia, Kiev was hit by a massive explosion on Monday morning. The blast broke months of peace in the Ukrainian capital.

Monday’s attacks in the city center mostly targeted the outskirts of Kiev.

Associated Press reporters also heard explosions in the city of Dnipro on Monday morning. Ukrainian media reported explosions in other cities, including Lviv, in the west of the country. It has been a refuge for many people fleeing war in the past.

At least three explosions were reported in Kiev around 8:15 a.m. local time. Two explosions were then heard. An Agence France-Presse journalist in the city saw dozens of ambulances arriving at the scene of the explosion.

In addition, “several more explosions occurred in the Shevchenkivskyi district in the center of the capital,” Kyiv Mayor Vitali Klitschko said on social media.

The video posted on social media shows that the area is covered in black smoke.

The last Russian attack on Kiev was on June 26.

The blasts came after Putin claimed Ukraine was behind an explosion on a bridge linking Crimea to Russia, which injured three people.

“The author, perpetrator and sponsor is the Ukrainian secret service,” Putin said Saturday of the Crimea bridge bombing, describing it as a “terrorist act.”

Putin was speaking during a meeting with the head of the investigative committee he has set up to look into the bombings, Russian media reported.

The Russian leader is preparing for a meeting with his Security Council on Monday, the Kremlin told local news agencies.

“Tomorrow the president has a planned meeting with the permanent members of the Security Council,” Kremlin spokesman Dmitry Peskov said.

The blast that hit the bridge sparked an outcry from Ukrainians and others on social media.