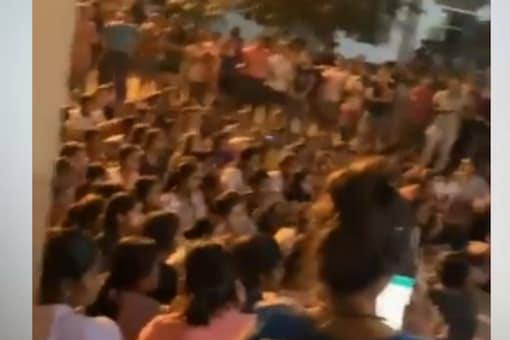 Students are protesting at Chandigarh University in Mohali, Punjab, after a girl allegedly leaked private videos of her hostel mates online. Police registered a case in this regard and arrested the accused young woman.

The posts on social media were deleted by the police and the university administration. A few girls attempted suicide after their videos were leaked. Officials of the privately run university said. They said a girl fainted and was rushed to the hospital and the girl’s condition is now stable.

“So far in the police investigation, they have found that the accused has only one video of himself. Video records of no one else have been found. The electronic devices and mobile phones will be taken into custody and sent for forensic examination.” Mohali police chief Vivek Soni said

Mr. Soni said that there was no fatality in the incident and requested the public not to believe rumours. “A student was taken in the ambulance suffering from anxiety and our team is contacting him,” Soni said.

A bus fell from a bridge in Jharkhand ‘s Hazaribagh district, many people were killed

“The video shot by a girl student and the subject of publicity… forensic evidence is being collected. However, no suicide (death) attempt has been reported so far. People are requested not to spread rumours,” the police officer said.

“A girl in Chandigarh University has gone viral by recording offensive videos of many students. This is very serious and shameful. All the culprits involved will get the strictest punishment. The victim girls have courage. We are all with you. Be patient,” Mr Kejriwal tweeted. said in the message.

Manisha Gulati, chairperson of the Punjab State Commission for Women, said that an investigation into the matter is underway. “This is a serious matter. I am here to reassure the parents of all the students that the accused will not be spared,” he said in a statement.

Ms Gulati said an ambulance had arrived on campus last night after some of the students who were part of the protest started suffering from anxiety.

Punjab School Education Minister Harjot Singh Bains appealed to the students of the university to remain calm. The guilty will be punished. It is a very sensitive event with the respect of girls attached to it. Everyone including the media should take very careful steps, we as a society should also check,” the minister tweeted.

Senior opposition Congress leader Pawan Khera condemned the incident and requested not to share the leaked video. “To all responsible Indians, humble request. Do not repost, forward or share any MMS/video of this #chandigarhuniversity horror. We build a digitally responsible society,” he tweeted.