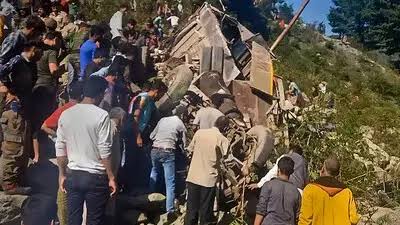 After the accident, local people at the accident site rushed to help. Ambulance and officers attended the scene.

“Condolences over the tractor-trolley accident in Kanpur. Condolences to the bereaved and prayers for the injured. Local administration is extending all possible assistance to the victims,” ​​the Prime Minister’s Office tweeted, adding that the deceased have been released from their homes. The family will be given a compensation of ₹2 lakh – from the Prime Minister’s Relief Fund – and the injured will be given ₹50,000.

After the accident, Yogi Adityanath made a plea that “tractor-trolleys should be used only as goods-carriers and not suitable for carrying people,” the chief minister’s office said in a statement.

His office also mentioned that a compensation worth ₹ 2 lakh will be given by the state government to the families of those who died. “The road accident in Kanpur district is very heartbreaking. District Magistrate and other higher authorities have been asked to go to the spot immediately and conduct relief and rescue operations in wartime conditions. Appropriate treatment has been ordered to the injured,” Yogi tweeted.

“The loss of life in this accident is very sad,” he said in another post.

Defense Minister Rajnath Singh said he condoled with those who lost their lives in the accident. Former UP Chief Minister Mayawati and the Congress also expressed grief over the incident.