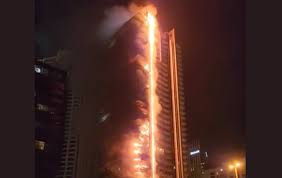 No casualty reported. The 35-storey High Rise building is part of a series of towers called 8 Boulevard Walk by construction giant Emaar, a state-backed developer in Dubai.

A massive fire broke out in Dubai early Monday morning in a 35-storey highrise building located near the Burj Khalifa, the tallest building in the world, media reports said.

Videos posted on social media showed flames engulfing several floors of the building that reportedly belongs to the construction giant Emaar, the state-backed developer in Dubai. News agency Associated Press said it was not immediately clear if the fire caused injuries to anyone.

Local media reports also said no injuries have been reported so far.

AP reported that the blaze had been extinguished by the time its journalist reached the site. According to the report, the building is part of a series of towers called 8 Boulevard Walk by Emaar, and it now has black char marks across the facade.

While the Dubai police and the Dubai Civil Defense are yet to comment on the fire, the videos showed them at the site along with first-responders, Al Khaleej Times report said.

Some eyewitnesses wrote on social media that the fire alarm did not work.

Emaar and the city-state’s Dubai Media Office have also not come out with any statement.

Quoting eyewitnesses, local media reports said the fire had started on a lower apartment and then spread upwards, and that emergency services extinguished the flames soon. There was reportedly a traffic build-up in the morning as the nearby streets in the area were closed off.