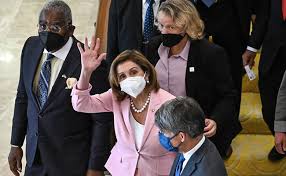 In response to U.S. House Speaker Pelosi’s visit to Taiwan, the Chinese military has been placed on high alert and will begin “targeted military operations,” the Chinese defence ministry announced on Tuesday evening.

Separately, the Eastern Theatre Command of the People’s Liberation Army announced that starting Tuesday night, combined military activities will be carried out close to Taiwan.

According to the Eastern Theatre Command, the exercises would involve joint air and sea drills in Taiwan’s north, southwest, and southeast, long-range live shooting in the Taiwan Strait, and missile test launches in the sea east of Taiwan.

The Chinese military will conduct live-firing drills and other operations near Taiwan from August 4 to August 7, according to the official news agency Xinhua early on Tuesday.

Beijing denounces Pelosi’s trip to Taiwan
China denounced Pelosi’s visit to Taiwan on Tuesday, claiming it was against the “one
China” tenet and the terms of the three Sino-US communiqués.

“In response to the US Speaker’s visit, China will unquestionably take all necessary steps to firmly preserve its sovereignty and territorial integrity. The US and the separatist groups supporting “Taiwan independence” must bear the full brunt of the consequences, according to Chinese Foreign Minister Wang Yi.

Full message from Nancy Pelosi on her trip to Taiwan

Our trip recognises US support for Taiwan’s democracy, says Nancy Pelosi
“The trip to Taiwan by our delegation recognises America’s enduring dedication to assisting Taiwan’s thriving democracy. Our discussions with the Taiwanese leadership have helped to advance our common goals, such as establishing a free and open Indo-Pacific region, and to reaffirm our support for our partner “After landing in Taiwan, Nancy Pelosi, speaker of the US House, released a statement.