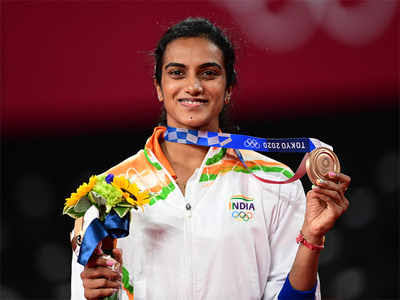 PV Sindhu on Monday (August 8) stood atop the podium and hoisted the Indian flag at the Commonwealth Games (CWG) 2022. India won the gold against Canada’s Michelle Lee in the women’s singles final in Birmingham. The 27-year-old Sindhu defeated the Canadian with some powerful shuttling and aggression, as her hunger for gold was evident in the smashes with which she played the shots. He won the match 21-15, 21-13.

The two-time Olympic bronze medalist was keen to win gold for the country in Sindh at the Commonwealth Games. It was also her gold medal at the Games. Earlier, Sindhu was at her best in the semi-finals as well, taking out her Malaysian opponent comfortably in straight games, winning the match 21-10, 21-17 in quick time.

In 2018, Sindhu was defeated in the final by India’s veteran shuttler Saina Nehwal. Notably, Lee is the 2014 CWG gold medalist in Glasgow and is currently world no.13.