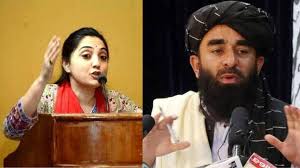 The Taliban have also begun to offer advice: in response to Nupur Sharma’s statement about Prophet Mohammad, he advised the Indian government to refrain from disrespecting Islam in the presence of such zealots.

Nupur Sharma, a former BJP spokeswoman, made comments about Nabi Mohammad that aroused outrage in Islamic countries. Islamic countries have slammed the declaration and demanded an explanation from India. Afghanistan’s name has also been added to this episode. India has also received advice from the Taliban administration in Afghanistan.

The Taliban has urged India’s government to take action against radicals who denigrate Islam and incite Muslims. Zabihullah Mujahid, a Taliban spokesman, claimed that an official from India’s ruling party used disparaging words against Prophet Mohammad. It is severely condemned by the Islamic Emirate of Afghanistan.

All religions must be respected and tolerated, according to the United Nations.
In this regard, the United Nations has also released a statement criticising Islamic countries. “I have not heard the remark myself, but I have seen it,” said a spokeswoman for UN Secretary-General Antonio Guterres. I can only say that we promote religious tolerance and respect.

This remark has been opposed by 14 countries.
14 countries have expressed their disapproval with Nupur Sharma’s comments thus far. Iran, Iraq, Kuwait, Qatar, Saudi Arabia, Oman, the United Arab Emirates, Jordan, Afghanistan, Pakistan, Bahrain, the Maldives, Libya, and Indonesia are among these countries. Indian products are prohibited in Saudi Arabia, Kuwait, Bahrain, and other Arab countries’ supermarkets.

Missiles rain down on Odesa as Russia celebrates its WWII win

The dead toll in the blown-out Havana hotel has risen to 26.

It was also criticised by the Organization of Islamic Cooperation (OIC), which represents 57 Muslim countries. According to the organization’s social media posts, violence against Muslims has risen in India in the past. Many states have outlawed the headscarf and placed restrictions on Muslim students in schools.

Nupur Sharma’s words have also been criticised by Pakistan’s new Prime Minister, Shahbaz Sharif, who stated: “Our love for the Prophet is above all.” Every Muslim has the ability to give his life for them.