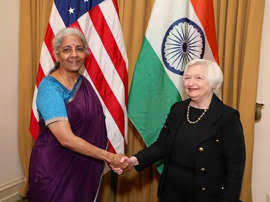 Sitharaman also informed that India is in diplomatic talks with various countries to make RuPay acceptable in their countries.

“We have ongoing conversations with various countries. Singapore and the UAE are all now showing interest in accepting e-rupay in their countries,” Sitharaman told the Brookings Institute think-tank during a fireside discussion with eminent economist Ishwar Prasad.

“Not only that, UPI (Unified Payments Interface), BHIM App and NCPI (National Payments Corporation of India) are now organizing themselves in such a way that their systems can be developed robustly in their respective countries. The Indian systems and interoperability itself It will add strength to the skills of Indians in those countries,” he said.

Meanwhile, amid the ongoing conflict in Ukraine, Sitharaman called on developed countries to take responsibility for the global spillover caused by the policy decisions they made.

In his written statement, the minister said, it is an intervention on developed countries to impose sanctions on nations that are capable of fulfilling their moral and democratic responsibilities towards their people.

“International cooperation is needed more than ever” is clearly cited. In the near future, developed countries will have to take responsibility for the global spillover of political and economic policy decisions. Instead of imposing sanctions on those countries, they should create safety nets. And perform democratic duties.

While India is on its way to becoming the fastest growing major economy in the world In its July 2022 report, the IMF projected India’s GDP growth rate for 2022 at 7.4 percent.

The IMF’s latest estimate of India’s GDP growth is lower than the Reserve Bank of India’s (RBI) projection of 7 percent growth for the financial year 2022-23. However, despite the recession, India will remain among the fastest growing economies.

As India prepares to take over the presidency of the G-20 group of countries, Sitharaman said “India is ready to do everything to facilitate dialogue, discussion and decision on these important issues.”

He cited several factors underpinning India’s growth, including digitization and financial inclusion, strengthening MSMEs and improving the quality of government spending with an emphasis on capital expenditure and targeted social protection support for the poor.

Talking about India’s growth, the finance minister said, “India as a developing nation will always be instrumental in the growth of the world in general.”

“India’s commitment to multilateralism is evident as we have delivered vaccines to more than 100 countries, provided disaster relief and partnered with other countries with a focus on green growth, better connectivity, digital delivery and accessible health”.

The Union Finance Minister will participate in roundtables on ‘Strengthening Investment and Innovation in the India-US Corridor’ and ‘Investing in India’s Digital Revolution’ with USIBC and USISPF.