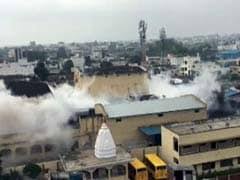 The incident took place at Al-Du’a meat factory. The factory is owned by Haji Zaheer. All the injured were rushed to JN Medical College, the cause of gas leakage is under observation.

“After the gas leak, the factory has been evacuated immediately and the situation is normal for now but there may still be effects of gas in the vicinity.

Treatment of the victims has started,” a police spokesperson said.

Immediately after the incident, the laborers started breathing and were taken to the medical college. But they are safe now.

“Ammonia gas leak occurred in a meat factory in Rorawar area, where mostly women were in charge of packaging work. About 50 people have been admitted to the medical college due to breathing problems. Doctors have confirmed that all are stable,” news agency ANI Aligarh quoted DM.