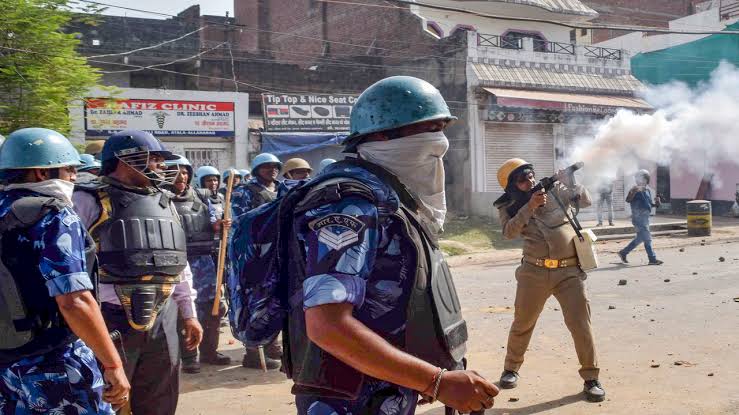 The residence of the main accused Javed Pump was demolished by a bulldozer about Prayagraj Violence , and police officers were present in huge numbers.
The Javed Pump House is being bulldozed.

The residence of Javed Pump, the primary culprit in the Prayagraj violence case, has been demolished by bulldozers.

Bulldozer Action On Javed Pump: The Yogi Government has taken strict action in the Prayagraj Violence. The residence of Javed Pump, the primary culprit in the case, has been demolished by bulldozers. On this occasion, a large police presence is there. Javed Pump owns a magnificent bungalow, which will be razed by bulldozers in the near future. It’s worth emphasising that, considering the gravity of the situation, a large police force has arrived on the scene

A notice was posted at Javed’s residence earlier today, and the bulldozer action was announced around 11 a.m. With this, it is apparent that the Yogi government would not remain silent about the violence in Uttar Pradesh.

The actions taken after Javed Ahmed’s name was brought to light in the violence that occurred after Friday prayers on June 10 are being viewed from a different perspective. His wife and daughter, in addition to Javed Pump, are reported to be engaged in the Prayagraj violence case. The action taken against Javed Pump on Sunday is said to have been taken in response to the earlier notice.

The PDA officials issued an order to leave the house by 11 a.m. The bulldozer operation, however, began around 12.45 p.m., amid a tight-knit arrangement between the police and the administration.

The police have ordered Javed Pump’s home to be evacuated. There’s a commotion now. The administration team has arrived, as has the Prayagraj Development Authority. There have been police officers wearing helmets deployed with complete security apparatus. In JK Ashiana Colony, Kareli, and Javed Pump, a large police force has been deployed. On the streets of the colony, police are conducting a flag march. In addition, security workers and officials are assessing the situation within the house’s confines. On the ground, women soldiers have also been deployed.

Yogi is a firm believer in nonviolence.

Yesterday, while giving severe orders to the officers, CM Yogi remarked that the rioters should be dealt with harshly. The administration took a huge measure in this issue today, bulldozing the residence of the primary accused of violence, Javed Ahmed Pump, to compensate for the harm caused by the violence. Javed Pump’s house has been demolished by two bulldozers.