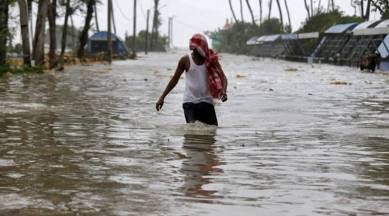 According to a UN report, nearly five million people in India will be internally displaced as a result of climate change and disasters in 2021.

According to the UNHCR’s annual Global Trends Report, 100 million people were forced to flee their homes last year due to violence, human rights violations, food insecurity, the climate crisis, the war in Ukraine, and other emergencies ranging from Africa to Afghanistan.

According to the Internal Displacement Monitoring Centre (IDMC), there will be 23.7 million new internal displacements worldwide due to disasters in 2021. (these are in addition to those internally displaced due to conflict and violence). According to the report, this represented a decrease of seven million, or 23%, from the previous year.

“”The largest disaster-related displacements in 2021 occurred in China (6.0 million), the Philippines (5.7 million), and India (4.9 million). The majority of disaster displacements this year were temporary “it said.

The majority of internally displaced people returned home, but 5.9 million people worldwide remained displaced at the end of the year due to disasters, according to the report. According to the UN, the number of people forced to flee their homes has risen year after year over the last decade to the highest level since records began, a trend that can only be reversed by a new, concerted push toward peacemaking.

The UN agency stated that it is impossible to ignore the developments that occurred in early 2022, including Russia’s war against Ukraine, from January 2021 to December 2021. “Since then, the Russian invasion of Ukraine has caused the fastest and one of the largest forced displacement crises since World War II, as well as other emergencies from Africa to Afghanistan and beyond,” the report said.

According to the report, there will be 89.3 million forcibly displaced people worldwide by the end of 2021, including 27.1 million refugees, 21.3 million refugees under UNHCR’s mandate, 5.8 million Palestine refugees under UNRWA’s mandate, 53.2 million internally displaced people, 4.6 million asylum seekers, and 4.4 million Venezuelans displaced abroad. There were 1.4 million new asylum claims filed. The United States received the most new individual applications (188,900), followed by Germany (148,200), Mexico (132,700), Costa Rica (108,500), and France (90,200).

By May 2022, more than 100 million people had been forcibly displaced around the world as a result of persecution, conflict, violence, human rights violations, or events that seriously disrupted public order. “The numbers have risen every year for the last decade,” said UN High Commissioner for Refugees Filippo Grandi. “Either the international community acts to address this human tragedy, resolve conflicts, and find long-term solutions, or this heinous trend will continue.”

Last year was notable for the number of conflicts that escalated and new ones that erupted; according to the World Bank, 23 countries with a combined population of 850 million faced medium- or high-intensity conflicts. According to the UN agency, food scarcity, inflation, and the climate crisis are exacerbating people’s difficulties.

In 2021, the number of refugees increased to 27.1 million. Arrivals increased in Uganda, Chad, and Sudan, among other places. “The majority of refugees were once again hosted by neighbouring countries with limited resources. The number of asylum seekers increased by 11% to 4.6 million “According to the report.

Last year also saw the 15th consecutive annual increase in the number of people internally displaced by conflict, to 53.2 million. The rise was fueled by rising violence or conflict in some countries, such as Myanmar. The conflict in Ethiopia’s Tigray and other regions has forced millions to flee the country. Insurgencies in the Sahel region fueled new internal displacement, especially in Burkina Faso and Chad.